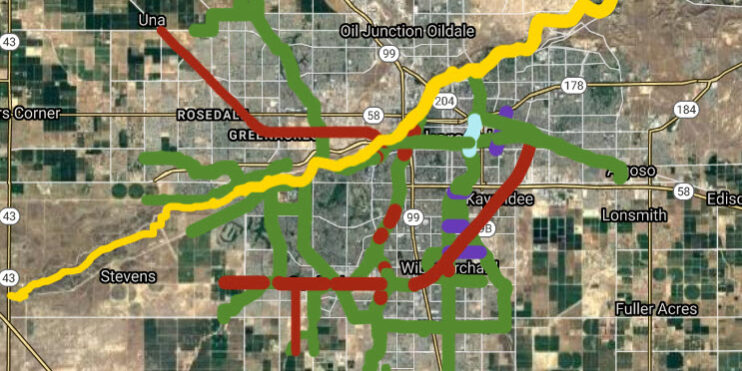 The KernTax Trails Plan is a proposed network of more than 50-miles of multi-use paths, linear parks, and canal improvements connecting metropolitan Bakersfield. The proposed plan would use right-of-way and easements of underutilized and abandoned railways, high tension power lines, and irrigation canals.

We are excited to announce that more than 40-miles of KernTax’s proposed trails were identified as Tier 1 projects recommended for funding over the next decade in Kern COG’s regional active transportation plan. The total estimated cost for the Tier 1 investments is just under $40 million, with an estimated local of match of $4 to $10 million depending on the availability of state and federal matching funds. See the map below to view a draft map of the KernTax Trails Plan.

In addition to social, community and environmental benefits, studies have found that urban linear parks can create economic value. An analysis of the San Antonio River Walk estimates that it attracted 11.5 million visitors, including 2.2 million residents and 9.3 million non-residents, during a one-year study. These visitors spend approximately $2.4 billion annually, supporting more than 31,000 jobs. San Antonio Riverwalk’s economic impact is $3.1 billion per year, generating roughly $173 million in local and state taxes annually. Another study of Atlanta’s Belt Line — a former railway corridor around the core of Atlanta being redeveloped into a multi-use trail — has contributed to 110 private investment projects valued at $2.4 billion, including more than 13,000 new residential units and nearly 2 million square feet of commercial space. The Belt Line has generated 30,000 permanent jobs and will increase the city’s tax base by $20 billion over 20 years — a 6:1 return on investment.