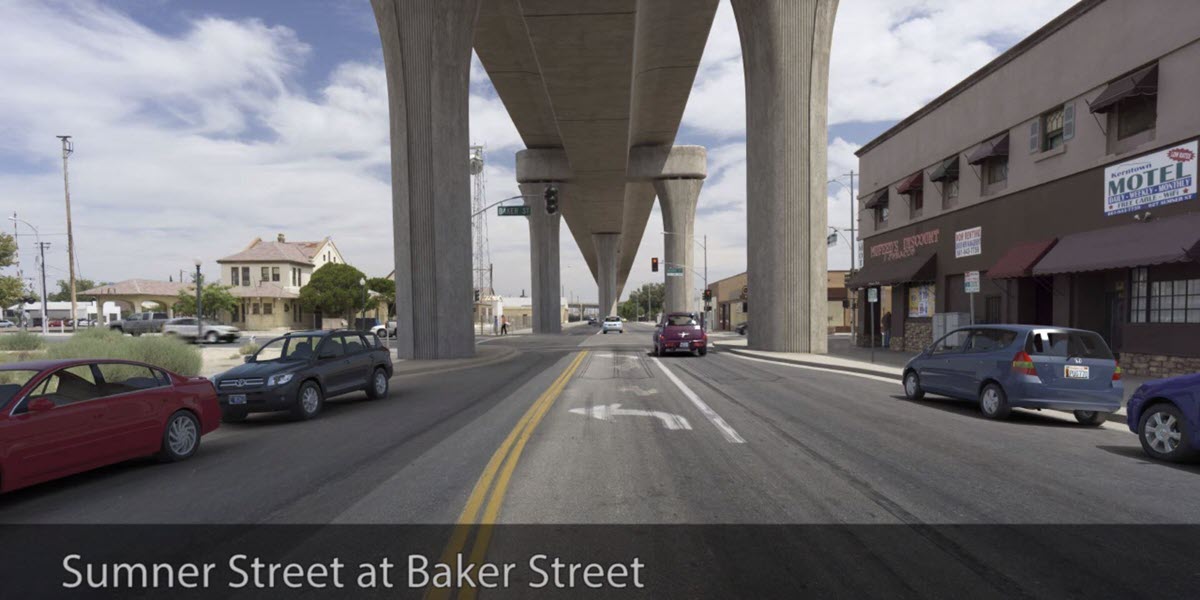 While Old Town Kern faces severe decline, please make no mistake: Our community must be committed to its revitalization.

For years I have been making this case to the Bakersfield leadership and Bakersfield City Council member Andrae Gonzales. Where was the council member when we were trying to save and revitalize Old Town Kern? The fact remains that Old Town Kern will be dramatically and adversely impacted by the high-speed rail bisecting it down the center of Sumner Street.

As currently planned and advocated by the council member, a large viaduct containing rail tracks will rise upwards of 60 feet at the Kern River, run adjacent to Golden State Avenue and continue rising to 75 feet above ground level through downtown and remain at that height directly above Sumner Street in one of our city’s most historic streets. A picture created by the High-Speed Rail Authority is attached. How can we possibly preserve the historic nature or urban scale with tracks the height of a seven-story building? For a city where public opinion of high-speed rail has mostly waned, this will be the most defining landmark in our city’s skyline — 70-plus-foot rail tracks that run miles through our historic neighborhoods. The City Council needs to address the impacts HSR will have on our city’s neighborhoods.

Professionals have extensively studied the social, environmental and economic impacts of elevated freeways and railroad tracks in Boston, Chicago, Los Angeles, Oakland, San Antonio, San Francisco, Sacramento, Stockton and other cities. The studies mostly all say the same thing: population decline; increased crime; adverse impacts on property values; reduced neighborhood cohesion; aesthetic, noise and vibration impacts. Dividing concrete lines resulting in crime, pollution and decay has divided urban neighborhoods across the country. This is the very reason that many of these communities are removing these structures, capping them or placing them underground. We can do better than this.

The best way to simultaneously leverage high-speed rail to revitalize downtown and Old Town Kern is to place the station near Union Avenue with an east-west platform above Union that allows passengers access to both downtown and Old Town. If that is not possible, Bakersfield should do its best to salvage the Locally Generated Alignment (LGA) along Golden State Avenue by placing the station in Old Town Kern instead of F Street.

A high-speed rail station in the vicinity of Sumner Street between Beale Avenue and Baker Street offers numerous benefits. First, it is compatible with Amtrak. By placing the high-speed rail station at the convergence of the Union Pacific and Burlington Northern Santa Fe Railroad tracks, Bakersfield could add a second Amtrak station and give travelers the option of a downtown or an Old Town/East Bakersfield stop. This would operate similarly to how Oakland-bound passengers stop both at Jack London Square and the Coliseum. Second, Bakersfield could maximize economic development and return on investment where it needs it most. We can measure economic growth and ROI from high-speed rail based on the developable land within a 1-mile radius of the station. F Street’s problem is that much of the potential economic development is immediately lost due to undevelopable land in the Kern River and Kern County Museum. Placing the station in Old Town, virtually all land areas within a 1-mile radius of the station could be developed and revitalized.

When it comes to the council member’s request, there is a question of taxpayer value and fiscal prudence. Why should taxpayers pay the bill for something the High-Speed Rail Authority can and will pay to mitigate its facility’s impacts? We must reinvest in Old Town Kern and all of Bakersfield’s disadvantaged communities to create ladders of opportunity. But in the case of Old Town Kern, we must start by revitalizing it either by placing the highspeed rail station in the neighborhood or looking at other approved alignment options.